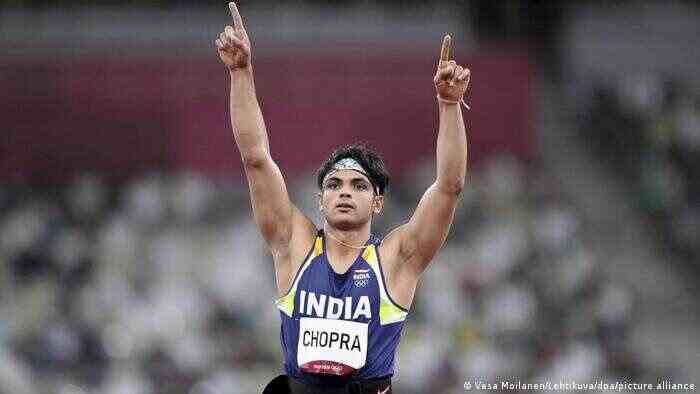 Neeraj Chopra shocked everyone when he topped Group A in the men’s Javelin Throw at the Tokyo Olympics 2021.

At just the age of 23, Neeraj Chopra has got enough gold medals to make him one of the biggest Indian athletes of all time.

Who is Neeraj Chopra ?

Neeraj Chopra is Gold medalist , of India, who get first atheletics medal for india in men’s javelin throw, Aug. 7, 2021, in Tokyo Olympics, Saturday .

He belongs to a Hindu family.

With a magnificent throw of 87.58 metres at the Tokyo Olympics 2020, Neeraj Chopra made history by becoming the first Indian to win a Gold medal in Javelin throw in the Olympic Games.

Putting an end to the country’s 121-year wait for an athletics medal, Neeraj Chopra won India’s first Olympic medal in track and field events. He joins Abhinav Bindra, who won the Gold in the 2008 Olympics.

Subedar Neeraj Chopra, a 23-year-old soldier from Panipat, Haryana was born on December 24, 1997, into a farming family in the small village of Khandar.

His father, Satish Kumar, is a farmer, while his mother, Saroj Devi is a housewife. He was raised alongside two sisters.

Neeraj took to javelin throw to lose weight as he was obese,

On 15 May 2016, Sub Neeraj enlisted in the 4 Rajputana Rifles as a Direct Entry Naib Subedar. After joining the Indian Army, he was selected for training at the Mission Olympics Wing and the Army Sports Institute in Pune.

He used to travel over 15 km just to reach the training ground, he used to take lifts from everyone passing by.

Neeraj Chopra was an ordinary teenager from Khandra, which is a village in India.

Friends push him so Thanks to this friend of his, India has got one of the biggest sporting talents ever.

Journey to the Olympics

In the World Junior Championships, Neeraj Chopra broke the javelin throw record with a throw distanced 86.48m. This throw was his personal best at the time.

His current best throw is recorded at 88.07m, which is insane and good enough to win a medal if he manages to equal or better his existing record.